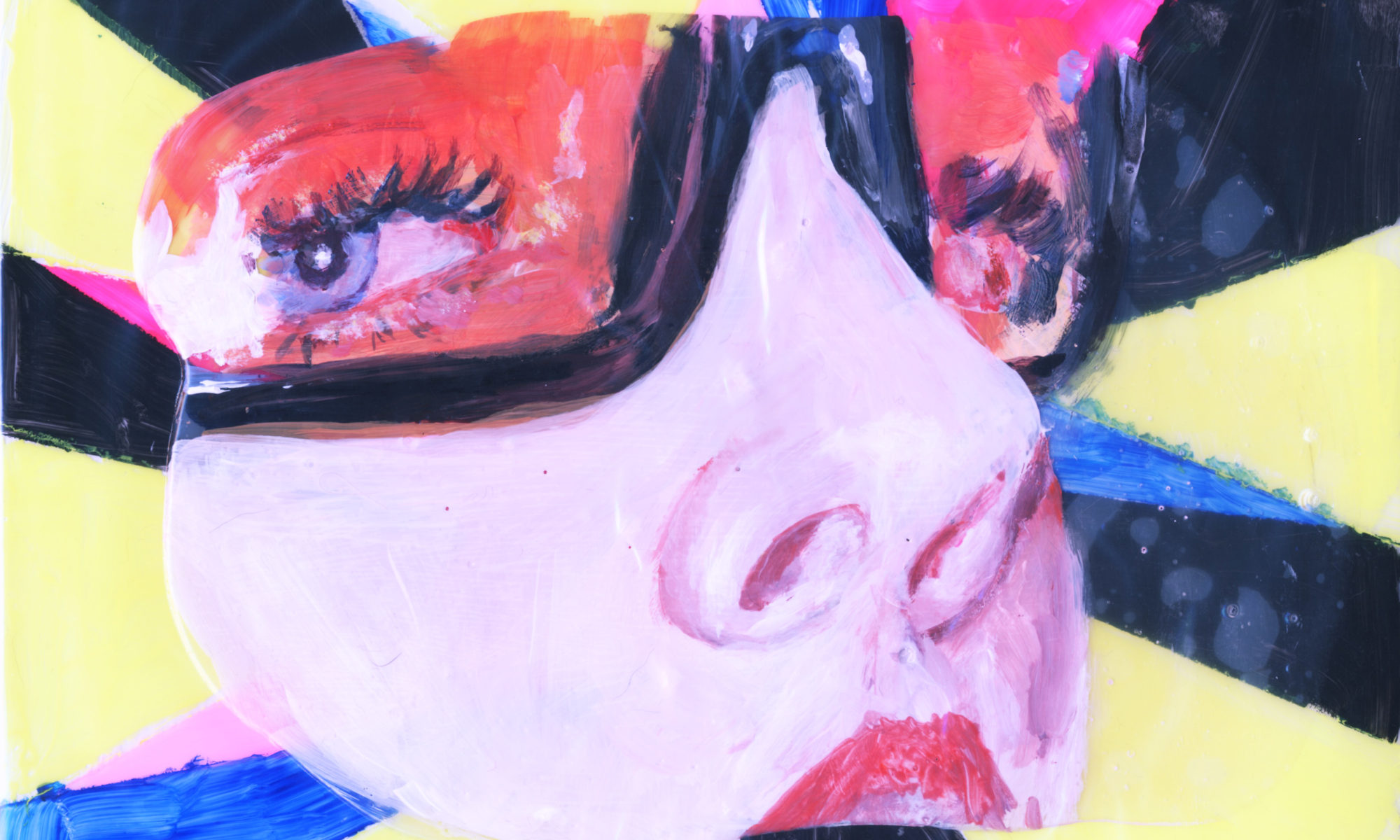 Laurence Broydé, There Is a Light That Never Goes Out

About halfway into The Hearing Trumpet (1)—painter and novelist Leonora
Carrington’s tale about a 92-year-old ex-Surrealist and her adventures in a kind of cult-like retirement community—hard-of-hearing heroine Marian Leatherby notices the painted portrait of a winking Spanish-seeming nun, watching her. This mysterious gaze is enough to set Marian’s imagination off, inventing a name and origin, as well as developing friendly feelings towards
her—a “wonderful and terrible woman,” as she is described in a book given to Marian by another of the community’s colourful characters. The gaze is of equal importance in Laurence Broydé’s Espaces d’Espèces, Spaces of Species (2). Eyes are omnipresent; they are multiple, innate to the crocheted series, Sculptures
à Porter, Sculptures to Wear. We encounter Visio, Rainbow, Argos, Le Troisième OEil, Fireman, (all 2017) mythological beings in an environment which seems to recall a stage backdrop; they are in what appears to be their natural habitat, mirroring our gaze and calling attention to ourselves—watchers caught in the act. Along with the wearable works, perched upon their pedestals, totem-like; the viewer stands, awaiting the unspooling of some yet-unknown event. Broydé’s figures suggest immanence—a thread, continuously weaving itself unto itself, over and over again, like an errant thought. The many fibrous knots which form them, although varying in colour, coalesce to form volume, attachments which are flexible yet firm, creating varying shapes and movements. As their title indicates, these wearable forms carry the potential for interaction (this is the first time they have been exhibited on pedestals, having previously been worn in the context of performances). In this way, these wearable works form a heterogeneous presence, plural and unheimlich (3) in nature; yet they also speak of absence. There is also transcendence in the immersive wall painting (part of the Open Space series) which serves as a backdrop for the group. Here, the artist has expanded the volume of the exhibition space; alluding to other existences (Foucault’s heterotopia), other forces, other states of mind. In past iterations of Open Spaces, she has created virtual extensions through the use of airbrushed paint and vinyl tape, transforming transitory spaces like stairways and hallways into open-ended stories whose content is to be determined by the visitor. These works remind us that liminal spaces also count ; they are the setting and the backdrop for transitory interactions—an exchange of glances, a conversation, a Duchampian nude descending, or perhaps even a rap video, as was the case at 38 Breil in Nantes. In the work of Laurence Broydé, contrasting elements combine, sometimes harmonising, other times playing off one another. They vary from whimsical—a tongue emerging from a flower—to reflexive—a kind of screen replaces the sea. They juxtapose vibrant and energetic colour palettes with themes reaching back to Antiquity—ceremonial masks and ritual, the Here and the Beyond, the presence of spirits and otherworldly beings which attest to old, animistic conceptions of the universe. Other hints toward an uncertain future abound in Broydé’s world; traces of our consumerist past carelessly strewn across a sandy shore—plastic wrappers, disposable cups and chewed-up bubble gum haunt our planet’s future with the only guarantee being the promise of global warming. A shift in perspective, or repositioning is often involved when approaching these works. In Oratoire (2022), we enter into a circular, womb-like space in order to convene with another unworn—or Lagerform (4), to borrow a term from German artist Franz Erhardt Walther— Sculpture to Wear. Scala Vestibuli (2018) is a vertical, bas-relief ceramic sculpture crowned with a voluminous crimson and black medusa-like mass, last worn in a performance (5) in 2021. Another side-step or displacement occurs with the small, crocheted flowers, glass-blown bubble-gum bubbles and balloons. Once we have drawn closer to inspect the work, we discover that what was once fragile and transitory has been imbued with a slightly more resistant aura; a type of mask perhaps, like slipping on a new persona. One step back and suddenly we discover that what appeared at first to be a garden of crocheted flowers6 is actually a face looking back at us, teasingly. This slippage occurs at several points in the exhibition—masks become sculptures which resemble creatures, a painting which is a curtain becomes sculpture (7)— something we only discover once we realize that what had previously seemed like painted details on a backdrop are actually protuberances, leading to possible portals. Some of the tableaux evoke Richterean spaces; a candle a flame (8) which will never cease to illuminate dark spaces. And, on the other side of obscurity, there is—or will be at some future point—light. Like a photograph of some sublime or memorable moment, Broydé’s works take hold of what is transitory and prolong it; suggesting something close to what Carrington intimates when her protagonist observes the nun’s portrait and begins to dream up a life for her, effectively prolonging her existence. The corollary to this is that in the process of observing, we realise that we are never alone; we are also constantly under observation. By our individual counterparts, and society as a group, in the present-day and in the future. After all, our contemporary actions are history in-the-making. An entire spectrum of possibilities opens itself up to us; what we make of these potential Worlds is of course, up to us.

1- Originally written in English and published in French in 1974, the book was written sometime in the 1940s.
2- A joint exhibition with artist Anna Pico, at Atelier Alain Lebras, Nantes, Dec. 3 – 29, 2022.
3- The notion of unheimlich was explored by Sigmund Freud (1856-1939) in the influential essay The Uncanny (1919) and references phenomena which are familiar and yet strange enough to elicit a strong psychological reaction in the subject. Automats, mannequins and Medusa’s head are among the examples given. 4 Lagerform was a term used by the artist to indicate a work which was otherwise used in a performance temporarily in a storage situation atop a plinth or pedestal. We can form connections with the works of German artist Franz Erhardt Walther (b. 1939) as well as with Brazilian artists Ligia Clark (1920-1988) and Helio Oiticica (1937-1980); all of whom incorporated the use of soft, wearable forms into their practices during the 1960s. Annette Messager (b. 1943) and Faith Wilding (b. 1943) also come to mind; both incorporated craft techniques
such as knitting and crocheting into fine arts practice in the 1970s.
5- Sculptures to Wear in Open Space (2021) at 38 Breil, by ECART Company.
6- Chemin de l’Amour
7- See Donald Judd’s (1928-1994) 1965 series Specific Objects which sought to avoid retreading the already heavily explored terrain of sculpture and painting by avoiding falling into either category.
8- The lit candle is a recurring theme in German painter Gerhardt Richter’s work (b. 1932). See Kerze (1982).